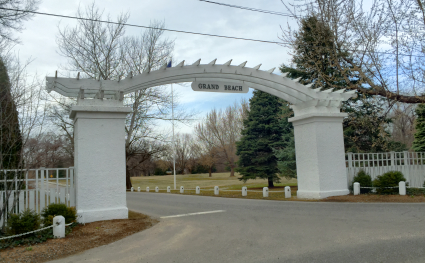 Since the early 1900's the name Grand Beach has been synonymous with the stately white gates that welcome visitors to this haven of beaches, sprawling green lawns, and streets shaded by beautiful trees. As opposed to many other communities, the Village of Grand Beach was developed initially as a resort area.

In the beginning of the 1900's, Floyd R. Perkins purchased 600 acres of dunes in the western part of New Buffalo Township. His initial idea of developing a shooting preserve quickly changed when he realized the land's potential as a resort community. Perkins and his partner, George Ely, formed the Grand Beach Company and acquired additional acreage which included four miles of beach. They built roads, bridges, waterworks, and a 9-hole golf course to accommodate the upcoming tourist industry.

Quick development of Grand Beach resulted when villagers purchased 20 cottages from Sears and Roebuck in 1907. By 1911, the Village had a total of 48 homes.

The famous Golfmore Hotel made its debut in 1922, but was completely destroyed by fire in 1939. This great loss, however, did not stop the Village from growing and becoming incorporated in 1934. Grand Beach reflects a mix of both summer and year-round residents.